It has been a busy month and not yet over.

On July 27th the Guardian published an article by Michael Strauss and myself on the 2015 processes called 'The year of negotiating precariously'. As we say the year 2015 may be recorded as one of the most extraordinarily successful – or disastrous – years in the history of international diplomatic negotiations.

On the 21st of July saw the launching of my 12th book called ‘Governance for Sustainable Development’ edited with: Hoonmin Lim, Sara Luna, Oana Rebedea, David Banisar and Quinn McKew The book represents the first book by the ‘Friends of Governance for Sustainable Development’ which is co-chaired by the governments of Mexico, Romania and the Republic of Korea there is a free download here.

You may be interested in the article Michael Strauss and I wrote that appeared in the Guardian last week called: ‘The year of negotiating precariously’ the article looks at the development of the Sustainable Development Goals, the Financing for Development Conference and the upcoming Climate Change Summit in Paris in November. 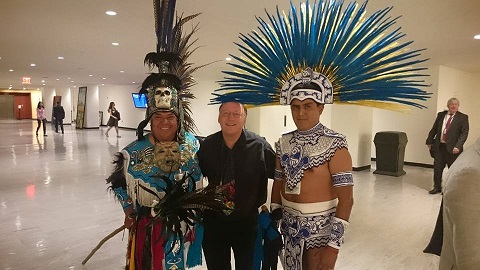 A much more colourful day in the basement of the United Nations Vienna Cafe.