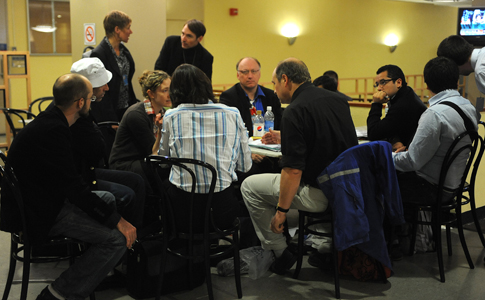 Together with the BBC World Service Trust and UN Radio, Stakeholder Forum is producing a series of radio programmes and podcastsat this year's.

The Live at the CSD (see http://media.stakeholderforum.org) team meeting to plan the next days radio.

The team is made up of  Richard Black is an environment correspondent with BBC News,  Emily Benson is a project manager at Stakeholder Forum and four training journalists: Merim Tenev is a radio and television journalist from Bulgaria. Catherine Krongo from Kenya's Captial FM Radio, Madhyama Subramanian is an independent filmmaker and visual communication designer from New Delhi, India and Armando Canchanya is the anchor of Peru´s principal radio news programme on RPP Noticias.Thre are four programmes to listern to daily: Today at the CSD- a magazien programme, Pioneers for the Planet is a look at individuals workign to make our planet more sustainable, Earth Talk keeps abreast of the issues under negotiations and Green Tables is a series of Round Tables on different issues.

During the CSD I produced a daily column in Outreach Issues called 'Food for Thought'. These can be downloaded from the Live at the CSD web site.